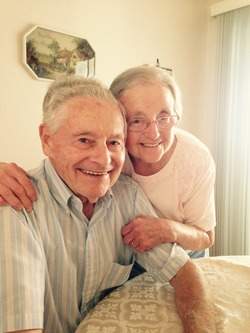 Albert and Lena were married on a cold January day, but the fire of their love and devotion burned brightly for 61 years. Constantly at each other’s side, they walked, gardened and bargain-shopped together. They even left this earth together.

Albert was an accomplished brick mason, and regularly helped family and friends with carpentry and repair projects. His handcrafted birdhouses created a bird habitat in their backyard. Lena was a baking and cook extraordinaire. They hosted many feasts with her legendary pies, breads, cakes and jams. Albert and Lena cherished their family, friends and neighbors.

They loved their Lord, and weren’t shy about sharing the Good News. They were members of the Washington Avenue Church of God in St. Joseph.

Their sons are Rein (Lisa) Schroeder of Union Pier, and Ed (Aliece) Schroeder of California. Their granddaughters are Jennifer (Matthew) Hutchinson and Karrin (Josh) Winslow.

Friends and neighbors, please join the family for Visitation on Tuesday, July 5, 5-7PM, at Pike Funeral Home, Boyd Chapel, 9191 Red Arrow Hwy., Bridgman. Services will be held on Wednesday, July 6, at 10AM, at Pike Funeral Home, Boyd Chapel with Rev. Andy Hannich officiating. Albert and Lena will be laid to rest in Hickory Bluff Cemetery, Lincoln Township. Memorial contributions may be given to Bethesda Lutheran Home, 600 Hoffmann Dr., Watertown, WI 53094.

To order memorial trees or send flowers to the family in memory of Albert Schroeder, please visit our flower store.