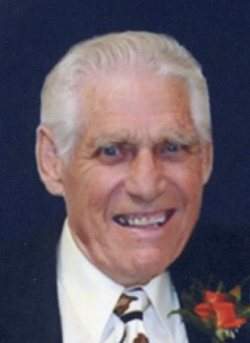 
Alfred Lawrence “Larry” Olson, 93, of Stevensville went to be with his Lord and Savior on Sunday, February 15, 2015 at Lakeland Regional Medical Center in St. Joseph.

Funeral services will be held 11 AM Friday, February 20, 2015, at Lake Michigan Christian Center, 9955 Church Street, Bridgman with his daughter-in-law Pastor Karyn L. Olson officiating. Friends may meet with the family 5 - 7 PM Thursday at Pike Funeral Home, Boyd Chapel, 9191 Red Arrow Hwy, Bridgman. Burial will be in Graceland Cemetery, Bridgman. As an expression of sympathy, memorial contributions may be given to Lake Michigan Christian Center.

Larry was born June 22, 1921 in Dundurn, Saskatchewan, Canada the son of the late Alfred L. and Dora L. (Shultz) Olson. On November 10, 1942 he married Hilda Suderman. She was the love of his life and preceded him in death on September 7, 2011. He was also preceded in death by his faithful son, Pastor Lawrence Olson on April 6, 2014. Following high school graduation he was a sales representative for Pet Milk. He then graduated from Wayne State University with a bachelor’s degree in Nursing Home administration. Larry was the administrator of the former Restwood Inn of South Haven and retired from the former Jordan’s Nursing Home in Bridgman. He was a member of Lake Michigan Christian Center and involved himself in all areas of ministry. Larry was a great example of surrendering your life to the Lord and his lifestyle reflected his love for his Savior.

Alfred was also preceded in death by five brothers and sisters.

To order memorial trees or send flowers to the family in memory of Alfred Olson, please visit our flower store.