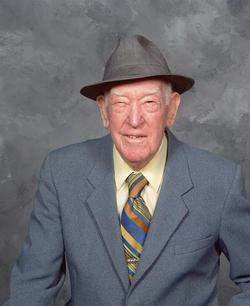 
Alfred Strefling, 96 of Stevensville, formerly of Watervliet crossed the threshold from this world of time to the eternal to be with his Lord and Savior Jesus Christ. Friday, November 15, 2013 at Woodland Terrace in Bridgman.

Funeral services will be held at 11 AM Tuesday, November 19, 2013 at Trinity Evangelical Lutheran Church, 5791 Sawyer Road, Sawyer with Reverend Randy D. Lett officiating. Burial will be in Watervliet City Cemetery. Friends may meet with the family from 6-8 PM Monday at Pike Funeral Home, Boyd Chapel, 9191 Red Arrow Hwy., Bridgman. In lieu of flowers memorial contributions may be given to Hospice at Home, 4025 Health Park Lane, St. Joseph, MI 49085.

Alfred was born in rural Galien, Michigan on June 11th, 1917, one of eleven children born to Adolph and Julia (Kluge) Strefling. During the great depression of the 1930's they lost their Mother in an automobile accident. The youngest child was three years of age. At the age of 15 years, he had his first job. Alfred found it very gratifying to help provide for the younger siblings who were motherless and help provide for their needs. The search for employment continued from the Beebe Mint farm of Baroda, Michigan, Central Railroad, and Industrial Rubber Company. He retired from the St Joseph Post Office in 1952.

In June of 1941 he was on the first draft into the Army and was discharged in January 1946. He was one of the few remaining World War II vets.

In November 1948, he married Irene Pitcher. She was an outstanding helpmate for more that fifty three years. On April 15, 2002, she was called home to her eternal rest. During their years together they traveled from the Pacific to the Atlantic and from Canada to Mexico. Also, they spent 25 winters in Florida.

He and Irene lived on Bowes Landing in Watervliet for 34 years. He worked at the golf course for ten years. Most of all he took great pride in keeping his yard, as well as his neighbors yards, in pristine condition. He was featured in a news article on his constant vigil at the Watervliet Cemetery following Irene's passing.

Survivors include a daughter Jeanette (Richard) King of St Marys, GA; two sisters: Edna Geik of Kalamazoo and Adeline Geik of Bridgman and many grandchildren and great grandchildren and several nieces and nephews.

To all of his relatives and friends he leaves a fond farewell.

To order memorial trees or send flowers to the family in memory of Alfred Strefling, please visit our flower store.