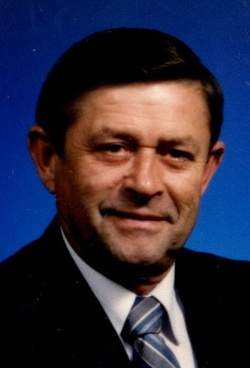 A funeral service will be held 1 PM Tuesday, December 27, 2016 at Trinity Evangelical Lutheran Church, 1733 W. Glendora Road, Buchanan, with Reverend Thomas Brazinsky officiating. Friends may meet with the family on Tuesday from 11-1 PM at the church. Burial will be in Weesaw Twp. Cemetery, Buchanan. As an expression of sympathy memorial contributions may be given to Trinity Evangelical Lutheran Church.

Allen was born February 9, 1934 in Buchanan, the son of the late John C. And Elizabeth (Busick) Zielke. On August 15, 1953 he married Rose Marie Nelson. Allen worked alongside his dad on the Zielke family farm and in his later years retired from the Berrien County Intermediate School District (Berrien RESA). He graduated from New Troy High School in 1953, was a member of Trinity Evangelical Lutheran Church of Glendora and enjoyed listening to Elvis. He has been a Reserve Deputy with the Berrien County Sheriff’s Department in the 1960-70's.

Allen was also preceded in death by a daughter, Deborah.

To order memorial trees or send flowers to the family in memory of Allen Zielke, please visit our flower store.