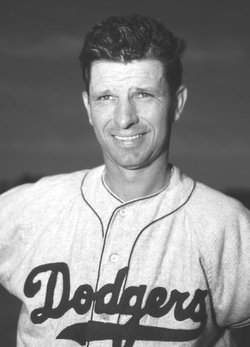 Andrew (Andy) Pafko, 92 of Bridgman, formerly of Chicago passed away on Tuesday, October 8, 2013 at Woodland Terrace, Bridgman, Michigan. He was born February 25, 1921 in Boyceville, WI the son of the late Michael and Suzanne (Duran) Pafko.

Andy, nicknamed “Handy Andy”, was a former center fielder in Major League Baseball from 1943 through 1959. He played for the Chicago Cubs from 1943–51, Brooklyn Dodgers in 1951-52 and for the Milwaukee Braves from 1953–59. In his 17-season career he was a five-time All-Star and played in four World Series with three different teams. After his playing days, he managed in the minor leagues, including a two-year stint as the skipper for the Kinston Eagles in the Carolina League. He eventually settled in the Chicago area.

One of six Pafko boys, he is survived by his brothers Frank and Ed and preceded by Lud, Mike, John. Survivors also include a sister-in-law, Anne Nedoba and nephews John and Michael Nedoba.

Funeral services will be held Monday, October 14 at 12 noon at Zion Evangelical Lutheran Church, 8600 W. Lawrence Ave, Norridge IL. with Reverend Luther Bajus officiating. Friends may meet with the family at the church at 10:00 AM until the time of the service. Burial will be in St. Luke Cemetery, Chicago. Memorials may be given to Zion Evan. Lutheran Church or the Alzheimer’s Association.

To order memorial trees or send flowers to the family in memory of Andrew Pafko, please visit our flower store.