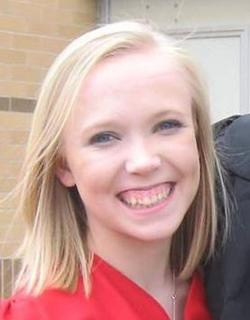 Funeral services will be held 11 AM Tuesday, September 24, 2013 at St. John’s Lutheran Church in Baroda with Reverend Bradley A. Ross officiating. Friends may meet with the family from 10 - 11 AM prior to the service at the church. As an expression of sympathy, memorial contributions may be given toward the needs of the family.

Angel was born Monday, August 14, 1995 in Kendallville, Indiana the daughter of Eldon R. Leitch and Merry K. Nitz. Angel graduated from Lakeshore High School in 2013. She was proud to be a cheerleader for her Lakeshore Lancers and had played in the Lakeshore Band for many years. She loved to draw and was an artist at heart. Angel was an active member and student leader of the St. John’s Lutheran Church. She was currently attending Lake Michigan College.

To order memorial trees or send flowers to the family in memory of Angela Nitz-Leitch, please visit our flower store.
Send a Sympathy Card