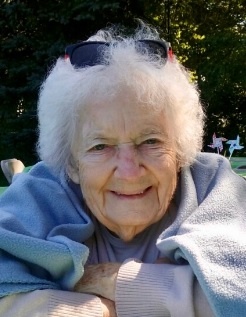 After earning her Masters in Nursing at the University of Chicago, she married Jerry Fink on May 10, 1958. While she worked at Michael Reese Hospital as a Pediatric Nurse, she and Jerry began a family, ultimately raising five daughters.

In 1970, the Fink family moved to the suburb of St. Charles, IL. Over the next 40 years she was a very active member of St. Marks Lutheran church where she considered many members her extended family. Her faith in Christ served to guide her steps throughout her life. Her favorite times were spent with people, whether she was making new friends or keeping the old, this brought her true happiness. She was always trying to make others laugh and feel welcome.

The last decade of her life was spent near her youngest daughter in Michigan where she resided at Woodland Terrace. True to form she continued to make new friends, often bringing a smile to others and kept staff guessing with her mischievous antics.

Anna is survived by her five daughters, Muriel Fink of Elgin, IL. , Judy Hitchcock (Greg) of Buford, GA., Laura Mihavics (Ken) of Elmhurst IL., Amy Fink of Milton‑Freewater, OR., and Lisa Fink of St. Joseph, MI., her sister Mary Paul of Woodridge, IL , many nieces and nephews including her cherished niece, Julie Paul of Woodridge, IL. and several grandchildren and great‑grandchildren.

Anna was preceded in death by her parents, her sisters Viola and Grace, her brother Joseph and her husband Jerry.

To order memorial trees or send flowers to the family in memory of Anna Fink, please visit our flower store.