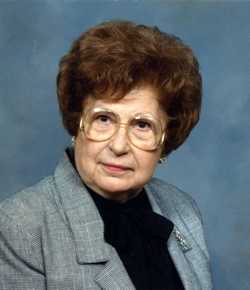 Funeral services will be held at 11:00 AM, Tuesday, October 22, 2013 at St. Paul’s Evangelical Lutheran Church, 2673 W. John Beers Road, Stevensville, with Reverend Jonathan Kruschel officiating. Burial will be in Lincoln Township Cemetery, Stevensville. Friends may meet with the family at the church from 10 AM Tuesday until the time of the service. Memorial contributions may be given to St. Paul’s Evangelical Lutheran Church. Online condolences accepted at www.PikeFH.com

Anne was born August 14, 1919 in Chicago the daughter of the late Michael and Mary (Pales) Kapusta. She married John G. Nedoba on June 22, 1940 and he preceded her in death on July 30, 1961. Anne was a member of St. Paul’s Evangelical Lutheran Church in Stevensville and had been employed at the Credit Bureau of St. Joseph for 22 years.

Anne was also preceded in death by an infant brother, Michael, and her sister and brother-in-law, Ellen and Andrew Pafko.

To order memorial trees or send flowers to the family in memory of Anne Nedoda, please visit our flower store.
Send a Sympathy Card