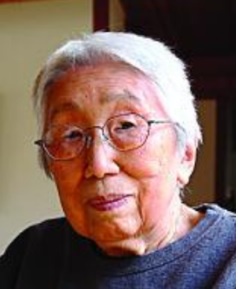 Beatrice Akiko Takeuchi passed away peacefully at Hanson Hospice Center in Stevensville. A resident of Harbert Michigan for the past 28 years. Formerly of Hyde Park, Chicago and New York City and Washington D.C. Daughter of Kojiro Takeuchi Publisher of The Great Northern Daily News in Seattle and Koto Masuda. Sister of Richard and Austin deceased and Arthur Takeuchi of Chicago.

Beatrice was interned during WWll at Camp Harmony in Pallayup, Washington and Minidoka in Idaho, which was a devastating experience in her life. After a campaign of lobbying, letter writing and support from her teachers she was allowed to leave the camp early to attend The New Bauhaus School in Chicago where she studied with Laszlo Maholy-Nagy. She left school early to work in the Housing Office in Washington D.C. providing housing for returning veterans. She later attended the Institute of Design at the Illinois Institute of Technology to complete her studies and taught Interior Design at the Art Institute of Chicago until 1991. She also worked as Interior Designer with her brother Architect Arthur S. Takeuchi. Most recently at the age of 97 with great clarity she was interviewed in the documentary film The New Bauhaus.

Beatrice a creative, intellectual and highly opinionated woman, she enjoyed reading, music, bird watching, writing, travel and spending time with her family and friends. She also enjoyed observing nature from the floor to ceiling windows of her Miesian home in Harbert. She leaves behind her children Michael Takeo Aaron and his wife Mary and Peter Eugene Aaron and his wife Leslie, sons with husband David Aaron (divorced 1969). She also leaves behind 3 grandchildren Nicole, Sean and Jeffrey. She will be deeply missed.

To order memorial trees or send flowers to the family in memory of Beatrice Takeuchi, please visit our flower store.