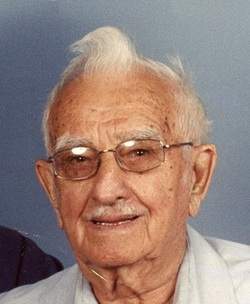 Bernard was born October 20, 1914 in Chicago, IL to the late Charles and Rose (Bogote) Bahus. Bernard was a WWII Army veteran. Bernard loved to drive and his son nicknamed him “Wheels” because he loved to travel. He drove until he was 98 1/2!

Bernard was also preceded in death by his wife Gloria Ann (Wingo) who passed away in 1986, and 6 brothers and sisters.

A private family graveside service will be held later.

To order memorial trees or send flowers to the family in memory of Bernard Bahus, please visit our flower store.