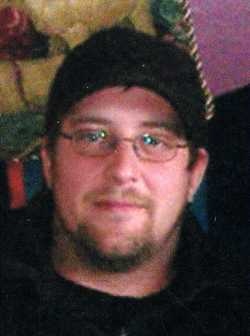 He was born on August 16, 1977 and adopted by Tim and Bonnie Miner, just three days later - truly the joy of their life.

He is survived by his parents (who reside in Sawyer) and his best friend ever, his sister, Erin Miner, who is presently residing in Florida. He was preceded in death by grandparents, John & Anne Miner and Edward & Naomi Lundin and is survived by many wonderful aunts & uncles, cousins, and dear friends.

Brad was a 1995 honors graduate from River Valley High School where he was very involved in marching band, symphony band, and jazz band playing the trumpet. The following 4 years were at a great liberal arts school, Kalamazoo College, studying music and psychology while performing in the college’s jazz band playing the electric bass guitar. ‘Techno music’ became his beloved hobby. He traveled to Berlin, to St. John Island, and spent 6 months studying Spanish and taking marimba lessons in Oxaca, Mexico. Upon leaving college, he immediately moved to Chicago and began working in music & audio. He became a founding member of Ill-Measures Production/Producer with his good friends.

Brad also became Vice-President Project Manager of the “Eagle Eye Surveillance Co.”; working hard to see their company flourish installing surveillance cameras throughout the city and suburbs. Several years ago the business began to wane and because of the recession, jobs were very difficult to find. So he came back to Michigan, working in St. Joseph, Holland, and South Haven. In September 2013 Brad went back to Chicago, very excited about several promising interviews coming up in January 2014. How anxious he was to get back on his feet.

Brad was a sweet young man with a giving soul and a huge heart. He loved helping people and would do anything to do so. He loved his family and friends dearly, just as they loved him.

We miss him terribly already, but how thankful we are that God blessed our life with him these 36 years. Strong, a hard worker, so likeable - always sharing his warmth & sweet smile with those around him. How grateful to know that our precious son Brad, is now at peace in heaven with his Lord.

A private graveside service will be held at Riverside Cemetery, Three Oaks and a public gathering of family and friends will be Monday, January 6, 2014 from 1:30 - 3:30 PM at Woodland Shores Baptist Church, 3555 Shawnee Road, Bridgman. In lieu of flowers memorial gifts may be made to The Tim Miner Family (to assist with expenses), or OAR (Ottagan Addictions Recover) Chester A. Ray Center, 231 Washington Blvd., Holland, MI 49423.

To order memorial trees or send flowers to the family in memory of Bradley Miner, please visit our flower store.