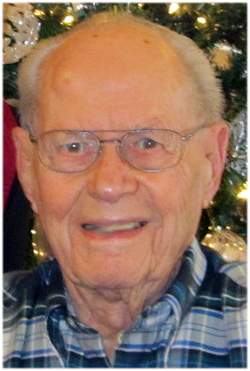 Friends may meet with the family from 1 - 3 PM Friday, April 24, 2015 at Pike Funeral Home, Boyd Chapel, 9191 Red Arrow Highway, Bridgman. Burial will be in Graceland Cemetery, Bridgman. In lieu of flowers memorials may be made in his name to Immanuel Lutheran Church, PO Box 26, Bridgman MI 49106 and/or the Katie Krug Volunteer Scholarship Fund (http://www.otsegofoundation.org/scholarships).

He was born January 15, 1915 in Chicago, Illinois, the son of the late Nicholas and Antoinette Szygielski. Bruno had just celebrated his100 year old birthday this past January.

Bruno attended Benton Harbor High School and grew up in the Sodus area. On November 30, 1941 Bruno was united in marriage to Gladys M. Spitzer of Bridgman. They celebrated 66 years of marriage before her passing in 2008. They were members of Immanuel Lutheran Church in Bridgman.

Bruno was a Veteran of WWII serving as a Sargent in the U.S. Army stationed in Ft. Worth, Texas. He also had been a lifetime member of the American Legion Post 331 for 70 years. Bruno was a tool and die maker working at Gelesko Tool and Die and he was a founder of Premier Tool and Die Cast Corp. located in Berrien Springs, Michigan. Prior to his retirement he operated the Bridgman Sporting Goods Store on Red Arrow Highway. He enjoyed fishing the inland lakes of Southwest Michigan and Lake Michigan at Bridgman Weko Beach. He was fondly known as our “Grandpa Ski” with a gentle soul who will be deeply missed.

He is survived by his son, Mike (Michelle) of Shawnee, Colorado; daughter, Tammy Krug of Gaylord; granddaughters Colleen and Alison Szygielski of Denver, and grandson, TJ Krug (Stephanie Miller) of Coos Bay, Oregon and a great grandchild due in June. Also surviving is his brother, Robert (Bonnie) Szygielski of Stevensville, Michigan.

He was preceded in death by his wife, Gladys, siblings Stephanie Vucich and Frank Szygielski, and granddaughter Katie Krug.

To order memorial trees or send flowers to the family in memory of Bruno Szygielski, please visit our flower store.