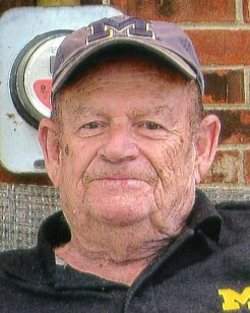 
Carl Paul Ackerman, 80, of Benton Harbor passed away on Sunday, September 7, 2014 at Hanson Hospice Center with family at his bedside.

Carl was born December 7, 1933 in Glendora, MI to the late Chalmer and Josephine (Kennedy) Ackerman. Carl graduated from Bridgman High school in 1952. He served his country in the US Army as a paratrooper during the Korean Conflict. On July 4, 1954, Carl married Sanae Furusho of Japan, his wife for 60 years. He was the owner of the Getaway Saloon/Getaway Cubbie Bar since 1983. He was an avid fan of St. Louis Cardinals, Michigan Wolverines, and Detroit Lions.

A graveside service will be held at Graceland Cemetery, Bridgman, MI, Sept 27th at 10:30am. Memorial contributions may be given to Hospice at Home, 4025 Health Park Lane, St. Joseph, MI 49085.

Yesterday the world lost one of its greats. Carl Ackerman was one of kindest, smartest, funniest men on the planet. His generosity was only matched by his humility and his list of positive traits were endless. Over the course of my childhood I probably spent more time at my grandparents’ house then either of my parents'. It was more of a home to me than any place I've ever actually lived. My one stable bastion of comfort in an every changing world. Not because of the facade, but because the love and warmth that my grandparents filled it with was unmatched. My grandfather is the closest person I've lost thus far in my life. The idea hasn't quite settled in my heart, but it has made me think. When deciding what to write, the term "great" kept coming up in my mind. Carl Ackerman was a great man, but upon more reflection I came to the realization that Carl Ackerman was the greatest man I've ever known. The single most honorable man I'll ever meet and a model for the morality that I want to live my life with. I'm saddened that I was never able to tell him that, but great men don't do it for the recognition. They aren't great for the glory, they're great because that's how they were born. Great men would be great if they were the only person on the planet. Just knowing that I had a person like that in my family fills me with pride. And through this difficult time, all I need to do to see an example of strength is to look towards my grandmother. This last 4th of July marked their 60th anniversary. “I like to make a the fun of her a lot,” but her positive outlook in this bleak time is astonishing. She is a rock. There is no real good way to end this, so I’ll just say that I love you grandpa and grandma more than words can explain; and I aspire to be even half the people that you are.

To order memorial trees or send flowers to the family in memory of Carl Ackerman, please visit our flower store.