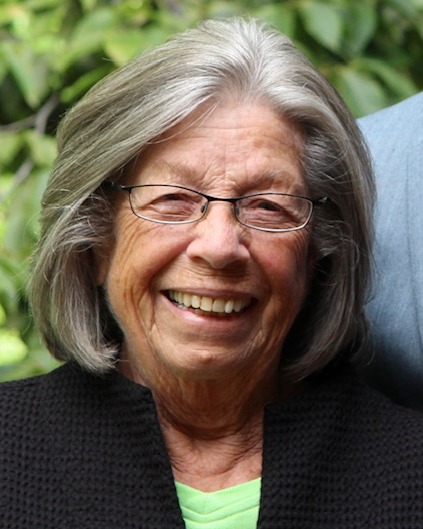 A graveside service will be held at 11 AM on September 19, 2022 at Ruggles Cemetery, 8530 Stevensville-Baroda Road. Baroda, MI 49101. Burial will be in Ruggles Cemetery. In lieu of flowers, donations can be made to Pike Funeral Home for a memorial bench that will be placed at Weko Beach next Spring. Checks can be made out to Pike Funeral Home or to her son Drew Menser. Online condolences accepted at www.PikeFH.com.

In 1954 Char met the love of her life, Bill Menser and began their 56-year journey together. They were happily married for 55 of those years. Together they created the family that brought them joy, challenge and meaning. They had resided for 37 years on a section of a family farm in Baroda that they lovingly named “Hickory Hill.” In their later years they moved back to Bridgman to be closer to Lake Michigan and were often seen walking to and from the beach. Char often lovingly reflected upon the many hours she spent with her children and grandchildren there. Char and Bill enjoyed simple times together walking the shoreline searching for treasures brought up from the lake, watching the sunset and being a part of the community gathering when taps were played at sunset.

Those who knew Char will remember her feisty nature, often an indication of her incredible strength and loyalty to family. Char’s nature also included an ease and love of laughter as well as her caring heart. She was dedicated to her family and community through Scouting, 4-H, Lakeshore Band Parents, Rotary-Ann participation, and numerous other community activities. She was never formally recognized for her incredible generosity as she had made hundreds of quilts that she put hours into and then gave away as beautiful labors of love.

Char loved her family and friends. She was active with friends playing cards, Mahjong, and dominos. Her friends were very important in her life. She spoke of them tenderly and with much gratitude.

She was preceded in death by her husband Bill, her sister Patricia, and her parents Ethel and Charles.

To order memorial trees or send flowers to the family in memory of Charlene "Char" Menser, please visit our flower store.
Send a Sympathy Card