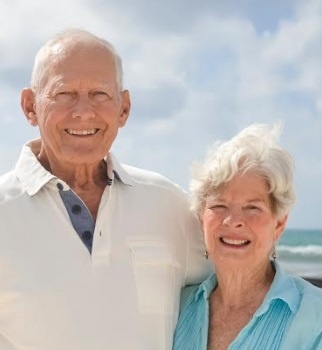 Charles (Chuck) S. Borden Jr, DDS, MS, age 84, died on Monday, November 2, at Lakeland Hospital in St Joseph, Michigan. Chuck had been successfully battling multiple ailments for some time and it took all of them together to bring this strong man down. He was humorous and brave to the end. There will be no funeral or visitation at this time, a celebration of life will be planned for warmer weather. Online condolences accepted at www.PikeFH.com

Chuck was born on Thursday, Sept 24, 1936, in Hinsdale, IL, to Charles Borden Sr. and Jane (Thiess) Borden. Eldest of 3 siblings, he was a good brother to his sister Mary Jane and brother Joseph, as they were to him. He enjoyed telling the story of his little sister barreling off the porch to knock a neighborhood bully off his back. The two of them managed to knock the bully’s tooth out!

Chuck attended Lyons Township H.S. and played middle linebacker on the football team. He told me he was 180 lbs. and had been told he was “pretty good “at hitting quarterbacks. He then attended University of Illinois in Urbana-Champaign, followed by Loyola University School of Dentistry. He excelled at both schools and then fulfilled his duty to the country as a U.S. Navy Dental Officer. He served at Marine Air Station El Toro CA, and aboard the aircraft carrier U.S.S. Ticonderoga. Life was good for a Naval officer in Southern California, he made lifelong friendships enjoyed jazz, golfing and generally fraternizing with his Navy buddies. This was when he learned to make the best darn Martini in the world. He saw jazz legend Miles Davis live on several occasions! He missed the arrival of Rock and Roll though. He told the story of shipping out on a tour of duty with the country listening to Sinatra and coming home to a nation obsessed with the Beatles. It was during this time in California that he met the love of his life Susan A. Baker. He was on a date with her roommate, who made the mistake of bringing him in after he had driven her home. Chuck said it was love at first sight for him, and that she made him a better man. They were married for 55 years.

When his Naval duties ended, Chuck and Susan moved to Chicago where he received his Master of Science in Orthodontics from Northwestern University. Susan taught school to pay the bills while Chuck studied. After graduating as an Orthodontist, he did a brief stint teaching at the University of Virginia. His son Charles (Chip) was born in Virginia in 1968, but he young family soon moved back to Illinois. They settled in Galesburg IL, near Chuck’s brother Joe and his family, where he would practice orthodontics for the next 39 years. Their daughter Melissa was born there in 1970. The 70’s were good, and Chuck immediately began to amass a wealth of friends. His humorous, caring spirit attracted many similar people. And he looked great in his turtleneck and leather blazer!

Over the years in Galesburg, Chuck touched the lives of many people. He was a dutiful Rotarian and member of many philanthropic boards. His profession gave beautiful smiles to generations of kids, and his generous nature gave smiles to so many more. Chuck and Susan hosted exchange students from Brazil, Mexico, Germany, Spain, Belgium and Sweden and treated all those kids as if they were their own, developing lifelong friendships. He was a second father to all his children’s friends as well. He always enjoyed spending time outdoors. His interests included golf, skiing, bird hunting, fly fishing, flying Cessna’s, and sailing. He loved going to the Knox-Galesburg Symphony and served on that Board for many years. He also loved all things Illini, even though this pastime was often difficult. Chuck and Susan greatly enjoyed traveling as well and quite literally traveled all over the world together and with family and friends. His ultimate joy was to be a grandpa. His four grandchildren completed his life and he spent as much time as he could with them, reading to them, fishing with them and building model trains with them. He also loved just sitting on the beach and watching them play. He was so very proud of all of them.

Chuck was happy, friendly, active, intelligent, giving and caring. He led a life anyone would call great and improved the lives of others. His humor was infectious, and he was always making others laugh and feel comfortable. He lifted the spirits of those around him with his wit and sincerity. He will be greatly missed by so many, but a life well lived is a blessing to the world. Everyone he touched feels his spirit and is better for it. That spirit was strong to the end. He continued to care for others and even entertain his caregivers with a wry humor. He had no enemies and few regrets.

Chuck is survived by his wife Susan Alice (Baker) Borden, his sister Mary Jane (Borden) Stolfa, his son Charles (Chip) Borden III, daughter-in-law Melissa McDonough-Borden and their children Sam and Estelle Borden of Edwardsville, IL, and daughter Melissa Borden Johnson and her sons Rowan and August Johnson of Wilmington, NC. We will all miss him greatly, friends and family alike, but we know he is up there waiting for us, and he will have the Martini’s ready. In lieu of flowers please consider donating to Trout Unlimited, at tu.org or Alliance for the Great
Lakes, at greatlakes.org, or finally American Rivers at americanrivers.org.

To order memorial trees or send flowers to the family in memory of Charles Borden Jr., please visit our flower store.