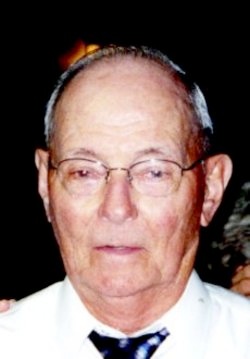 A funeral service will be held 11 AM Wednesday, November 26, 2014 at St. John’s Evangelical Lutheran Church, 9193 Cleveland Ave., Baroda with Reverend Bradley A. Ross officiating. Friends may meet with the family Tuesday from 6-8 PM at Pike Funeral Home, Boyd Chapel, 9191 Red Arrow Highway, Bridgman. Burial will be in Ruggles Cemetery, Baroda. Memorial contributions may be made to St. John’s Lutheran Church or Berrien County Cancer Service.

Charles was born August 14, 1919 in Wharton, Texas the son of the late Joseph and Sophia Getz. On March 1, 1952 he married Bernice L. Schinske and she preceded him in death on June 13, 1991. Charles was a graduate of Stevensville High School and a member of St. John’s Lutheran Church, Baroda. He was a US Navy veteran and a member of the Baroda American Legion Post 345. Charlie was a tool and die maker by trade and retired from Bendix Corporation in South Bend in 1983 after 42 years of service. He was a gardener and his passion was growing tomatoes. Charlie had been a member of the Dank and enjoyed visiting with friends there and polka dancing. Charles lived on a small family farm and for years allowed his farm to become a habitat for pheasants.

Charles was also preceded in death by two sons - Milton and Charlie Hoffman; a grandson - Robert Hoffman; a brother - Arnold Getz and a sister - Valasta Petzke.

To order memorial trees or send flowers to the family in memory of Charles Getz, please visit our flower store.