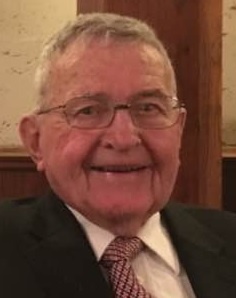 Dr. Charles O. “Doc” Sudhoff, 91 of Bridgman, Michigan, was rescued to his heavenly home on March 28, 2019 at Caretel Inns of Lakeland, St. Joseph, Michigan, surrounded by his family.

A celebration of life service will be conducted at 11:00 a.m. Saturday, April 6 at Immanuel Lutheran Church, 9650 North Church St, Bridgman, Michigan with Pastor Edward A. Meyer officiating. Interment will take place at Lutheran Cemetery, Peoria, Illinois, at a later date. Friends may meet with the family from 5-7 p.m. Friday, April 5 at Pike Funeral and Cremation Services, the Boyd Chapel, 9191 Red Arrow Highway, Bridgman. In lieu of flowers, memorial contributions may be made to Heart of Illinois Harvest ( www.hoiharvest.org ) or Concordia Seminary St. Louis ( www.csl.edu ). Online condolences are accepted at www.PikeFH.com

Charles was born July 1, 1927 in Richmond, Indiana, to Edmund and Martha (Jones) Sudhoff. He graduated from Boston (Indiana) High School, class of 1945. A World War II veteran, he served in the United States Army in the states of Indiana, Alabama, Washington, and Colorado, from 1946 to 1947. He graduated from the Iowa State College of Agricultural and Mechanical Arts (Ames) in 1953 with a Doctor of Veterinary Medicine degree.

He met Elfrieda M. Kretzmann in 1956. She was the daughter of Rev. M.F. Kretzmann and was assisting her father starting a new congregation in Plainfield, Indiana. She called Charles to invite him and his wife to attend the new church. Charles responded that he would be happy to attend, but that he was not married. On March 3, 1957, he and Elfrieda were married in Indianapolis. They shared 56 years of marriage and were blessed with two sons and one daughter. Elfrieda passed away in 2013.

He was a member of Immanuel Lutheran Church in Bridgman. He and Elfrieda were longtime members of Bethel Lutheran Church in Morton, Illinois. He served on numerous boards and committees at Bethel and for churches in Indiana. His work career began as a private practice veterinarian, in a partnership with Dr. Garth Keller, in Danville, Indiana. His next career stage, as a veterinary meat inspector/ supervisor with the U.S. Department of Agriculture lasted 34 years, with various work locations in Indiana and Illinois. He formerly resided in Richmond, Danville, and Muncie, Indiana and Pekin, Illinois. His hobbies and interests included farming, baseball, raising beef cattle, and American history. Doc was humble and kind and gentle and intelligent. Doc retired from USDA in 1990.  After retirement he engaged in various volunteer activities, including assisting a Peoria-area food bank by picking up excess food from vendors and delivering that food to the food bank. He was recognized for his service by Heart of Illinois Harvest in 2011. Over ten years he picked up approximately 15 tons of food for distribution to folks needing a hand.

He was also preceded in death by his sister Barbara Werner and a brother Frederick Sudhoff.

To order memorial trees or send flowers to the family in memory of Charles Sudhoff, please visit our flower store.