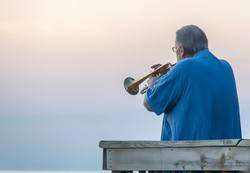 Corky was born September 20, 1956 in Benton Harbor, the son of the late William and Florence “Jackie” (Savage) Witt. On August 2, 2001 he married Jackie Pintcke and they shared 14 years together. He worked 30 years on the street department for the City of Bridgman. He played “Taps” at sunset at Weko Beach for 22 summers. Corky was a member of Stevensville United Methodist Church.

Survivors include his wife: Jackie; children: Mick (Katie) Witt of Wyoming, Sarah Witt of Bridgman; and many nieces and nephews.

Corky was preceded in death by his four siblings: Robert, Raymond, Jack and Carolyn.

To order memorial trees or send flowers to the family in memory of Corky Witt, please visit our flower store.