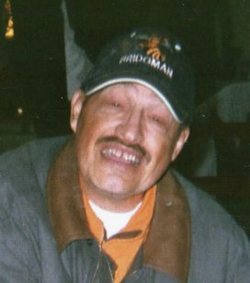 David was born November 10, 1955 in St. Joseph, MI, the son of the late Billy Charles and Esther Ruth (Hayes) Butts.

David’s time here on earth has been very blessed! He attended Blossomland Learning Center until age of 26. After that he worked at McDonald’s on M-139 for 17 years. Prior to moving to Bridgman his favorite place to “hang out” was the Orchard’s Mall - where he made many friends.

Anyone that knows David, knows that he had a great love for sports! Whether watching his nephews play or rooting for his favorite Michigan teams - he was a loyal fan! After moving, David began attending any and every Bridgman game he could - football, baseball, basketball, soccer, tennis, swimming, track, etc., boys and girls, from high school to elementary - he loved them all! Because of his enthusiasm and school spirit he became known as “Bridgman’s Super Fan”.

These kids were David’s life and the last few years were hard, as his health deteriorated, he wasn’t able to attend the games like he would have liked to, but know in your hearts he still followed you, and his spirit was with you, and it still is today!

Survivors include a sister - Debra Irwin (Bernie) of Benton Harbor, a brother - Ricky (Iris) Butts of Sawyer, a deceased brother Billy Walker and a sister-in-law Carol Boles Shryock, his nephews and nieces - Billy (Sonya), Ryan, Ashley, Gerry, Rene and Rhonda; his great nephew and nieces - Jazmine, Cayden and Lyla, and many other loved family members along with two special “angels”, Cherie and Sandy.

David was a very “special” person who touched the hearts of many and will be greatly missed!


Memorial Donations Memorial donations can be made to:
Harbor House

To order memorial trees or send flowers to the family in memory of David Butts, please visit our flower store.
Send a Sympathy Card