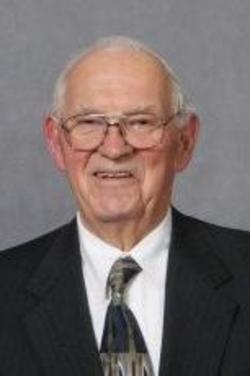 Funeral services will be held at 11 AM on Thursday, July 18, 2013 at St. John United Church of Christ, 200 W. Buffalo Street, New Buffalo with Reverend Damien Lake officiating. Friends may meet with the family from 5 - 7 PM on Wednesday at Pike Funeral Home, Boyd Chapel, 9191 Red Arrow Highway, Bridgman and 10 - 11 AM on Thursday at the church prior to the service. Memorial contributions may be given to St. John United Church of Christ.

David was born August 9, 1931 in Dollar Bay, Michigan, the son of the late John Emil and Matilda (Anderson) Holm. He married Fern Emily Hawley July 28, 1978 and they shared 33 years together until her death in November of 2011. David served in the United States Marines and was a Purple Heart recipient. He had previously been an active member of the New Buffalo Lions Club. He had served on the New Buffalo School Board and was the catalyst for starting the Ski Club at the high school. He retired from Prince Corporation as a sales representative. David owned and operated Holmes Greenhouse and Garden Center in New Buffalo and most recently was a lawn & garden and birdseed consultant at Sawyer Garden Center in Sawyer. David was a member of St. John United Church of Christ in New Buffalo.

David was preceded in death by his brother Theodore Holmes; and sisters - Linnea Hagland and Lydia Holmes.


Visitation prior to Service

To order memorial trees or send flowers to the family in memory of David Holmes, please visit our flower store.
Send a Sympathy Card