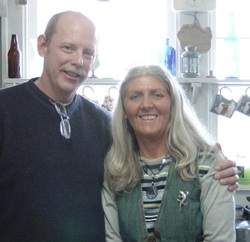 
Donald James Ackerman, 63, and his wife, Pamela Sue Ackerman, 67 passed away on Wednesday, September 13th, 2017 at their home.

A memorial service will be announced later.

Don and Pam met while both working at the Cook Nuclear Plant, and got married on October 15th, 1976.

Don grew up in Bridgman, with his brothers and sisters. Don was a skilled engineer, car mechanic, and all-around handyman. He always loved fixing things. He enjoyed driving any sort of automobile, from motorcycles, to snowmobiles, to 6-wheeled amphibious vehicles. He also loved to hunt deer in the upper peninsula near Newberry.

Pam grew up in Sister Lakes, and always had a fun personality that attracted many friends. She loved to wear interesting jewelry, which always started a conversation. She loved animals and caring for their pets; 3 cats, a lizard, and a rat. She also was known for selflessly giving back to the community, cleaning the streets of Bridgman picking
up litter.

To order memorial trees or send flowers to the family in memory of Donald Ackerman, please visit our flower store.