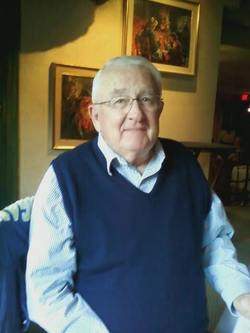 
Donald Bischoff, 84, passed away on Saturday, February 27 in Destin, Florida.

Donald was born on his Mother’s 21st birthday, Sept. 28, 1931 in St. Joseph. He was a 1950 graduate of St. Joseph High School where he participated in intramural sports, played tuba in the high school band and also in the St. Joseph Municipal Band. Donald was a residential house builder for many years, and joined the Carpenter’s Union in the early 1970’s. He worked at the Donald C. Cook Nuclear plant and was instrumental in helping to build the large containment towers. He was also a custom cabinet maker and furnished many homes with his beautiful woodworking.

In Donald’s later years, he was a member of the Southshore Concert Band. He was an avid fan of University of Michigan football, as well as the Lakeshore Lancers. He also served 8 years in the United States Naval Reserves. Donald enjoyed golfing and his favorite PGA player was Arnold Palmer.

He was preceded in death by his brother, Stuart and parents Ernest and Clara Bischoff.

To order memorial trees or send flowers to the family in memory of Donald Bischoff, please visit our flower store.