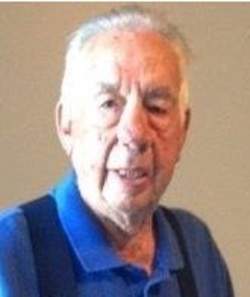 A memorial service will be held 1 PM, Sunday, November 8, 2015 at Pike Funeral Home, Boyd Chapel, 9191 Red Arrow Highway, Bridgman. Friends may meet with the family from 11 am - 1 pm prior to the service at the funeral home. In lieu of flowers memorial contributions may be made to Hospice at Home, 4025 Health Park Lane, St. Joseph MI 49085. Online live stream of the memorial service can be seen below at 1 PM Sunday.

Donald was born to Frances Voss in a plains' dugout in Lamar, Colorado on February 3, 1921. Don always wanted to be a cowboy. He never realized his dream, but he did live a very interesting life. He lived and worked on a farm in Illinois with his uncle and cousins in his teen years, while attending grade school. He went on to work on the excursion steamboat Idlewild, at a carnival and skating rink in St. Louis, Missouri, while attending night school to learn diesel engine repair. He was hired as a teacher during the war at the University of Missouri after being tested at Navy Pier in Chicago. After two years, the war ended and the diesel engine school closed, at which time he was hired as a diesel engine tester at Allis Chalmers (then Buda) in Chicago. He worked there for 40 years with perfect attendance. Don and his wife, Ruth, enjoyed spending time at their cottage at Lake Eliza, Indiana, where they owned and operated a merry-go-round and train. Don built a large truck camper at their garage in Harvey, Illinois, which they used to travel throughout the United States, Canada and Alaska. Don also enjoyed wood carving, despite his bad eyesight, and shared his carvings with family and friends. Don was a member of the South Suburban Chislers, the Methodist Church and Historical Society in Thornton, Illinois where he and Ruth lived for 25 years. Don was a quiet and kind man and will be missed.

Don was preceded in death by his wife, Ruth; sister, Dorothy; and step-children, Peggy and Michael.

To order memorial trees or send flowers to the family in memory of Donald Smith, please visit our flower store.