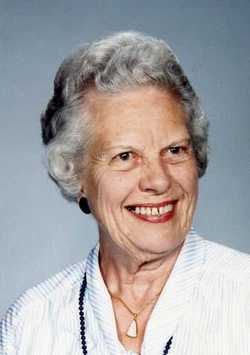 Funeral services will be held 1 PM Friday, March 1, 2013 at Pike Funeral Home, Boyd Chapel, 9191 Red Arrow Hwy, Bridgman with Hospice Chaplain Robert Puhr officiating. Burial will be in North Shore Memory Gardens, Coloma. Friends may meet with the family from 12:30 - 1 PM before the service at the funeral home. Memorial Contributions may be given to Harbor Light Hospice, 1608 East Day Road, Mishawaka, IN.

Donna was born September 4, 1913 in Burnaby, British Columbia, Canada the daughter of the late Donald and Susan (Flood) Kennedy, the oldest of five children, all of whom have preceded her in death. In 1927, she moved with her family of seven to Windsor Ontario by driving across the northern United States. “Don”, as she was called back then, married Russell E. Rowe on January 21, 1943. They immigrated to the United States when he joined the US Navy. After the war, they moved to St. Joseph, Michigan, a place she dearly loved. As a homemaker while raising her children, she was active in numerous volunteer activities including the PTA, Cub Scouts and Girl Scouts. She was also a long time member of Zion Evangelical Church in St. Joseph where she taught Sunday school and assisted with the children’s choir. Russell preceded her in death in 1973.

Donna also worked for the Merchant’s Credit Bureau for many years. She retired in 1973 to travel, her favorite pursuit. She saw the world in the next 25 years and spent many hours on her beloved Lake Michigan. Most of all, Donna enjoyed people and life, a fact always evident in her smile and positive attitude. She made a real difference in the life of many individuals.

To order memorial trees or send flowers to the family in memory of Donna Rowe, please visit our flower store.
Send a Sympathy Card