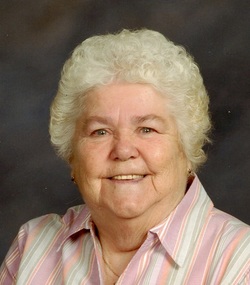 Donna was born April 11, 1935 in Stevensville, the daughter of the late Paul C. and Bertha (Lucker) Hoge. In June of 1951, Donna married Albert L. Shepherd who preceded her in death on July 26, 1998. As a lifelong member of Zion United Church of Christ, Donna was baptized and confirmed; was a member of the Ladie’s Aid and taught Sunday School for many years. Donna also worked at Pemco Die Casting retiring after 41 years. She loved vacationing at the cabin on Ford Lake in Fountain, MI. Donna loved life - and with her happy demeanor and big heart, she fed great food and love to all her family and friends; her signature of life was singing “Happy Birthday To You” on your birthday BEFORE 5AM !

To order memorial trees or send flowers to the family in memory of Donna Shepherd, please visit our flower store.
Send a Sympathy Card