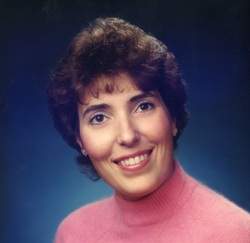 
Doreen Margaret Bell, 61, passed on Sunday August 7, 2016 after years of battling multiple myeloma. She was receiving care at Lakeland Regional Medical Center in St. Joseph, Michigan surrounded by her family.

A memorial service will be held at 11 am on Friday, August 12, 2016 at Pike Funeral Home, Boyd Chapel, 9191 Red Arrow Highway, Bridgman, with Reverend Christopher Noffke officiating. Friends are welcome to join the family from 10-11 AM prior to the service at the funeral home. Burial of the cremated remains will be in Riverview Cemetery, St. Joseph. A reception will follow the service at Lake Township Hall, 3220 Shawnee Rd., Bridgman. Memorial contributions in lieu of flowers can be made to the Humane Society of Southwest Michigan, 641 S. Crystal Ave, Benton Harbor or Marie Yeager Cancer Center, 3900 Hollywood Road, St. Joseph, MI 49085. A live stream of the funeral service may be seen at 11 am Friday.

Doreen Margaret Bell was born on November 9, 1954 in Burlington, Wisconsin to Marlin “Bud” Ehlert and the late Marilyn (Hofmann) Ehlert. She was raised in Wilmot, Wisconsin with sister Denise and brother David. Growing up, she enjoyed her horses and also downhill skiing. She attended Wilmot High School, where she enjoyed the performing arts until her graduation in 1972. She married Jon Bell on May 17, 1986 and they raised a combined family of 5 children.

She was a medical transcriptionist for over 20 years-working for many doctors and medical groups in the area. She took much pride in her work and loved that working from home allowed her to play an active role in her family’s lives. She developed many cherished relationships during her career.

In her free-time she was a dedicated sports fan. She loved watching her children and grandchildren participate in everything from soccer to ballet. When it didn’t involve her family, she loved college sports and football (particularly the Green Bay Packers).

She will be remembered for her generosity of self and devotion to family and friends. She was an involved grandmother who made it a point to see her grandchildren as often as possible. Even though she battled a chronic illness, she was perpetually upbeat and kind. Her devotion extended to animals as well-she was the proud pet parent to 5 cats and 2 dogs (and many grand-dogs along the way). She had a gentle spirit that led her to help any animal in need.

She was preceded in death by her mother, Marilyn Ehlert in 1995.

The family would like to thank all of the wonderful medical staff at Lakeland Regional Medical Center and the Marie Yeager Cancer Center for their role in her care.

To order memorial trees or send flowers to the family in memory of Doreen Bell, please visit our flower store.