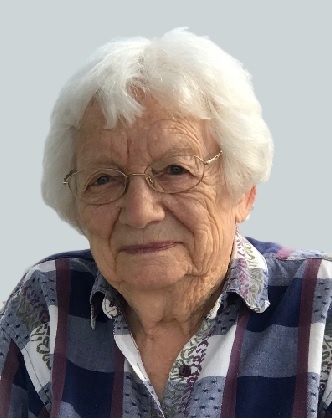 Funeral services will be held 11 AM Wednesday, September 25, 2019, at St. Paul’s Ev.  Lutheran Church, 2673 W. John Beers Road, Stevensville. Friends may meet with the family on Tuesday from 4:30 - 7 PM  at Pike Funeral Home, Boyd Chapel, 9191 Red Arrow Highway, Bridgman. As an expression of sympathy, memorial contributions may be given to St. Paul’s Ev. Lutheran Church Ladies Aid, The Box Factory for the Arts or the St. Joseph-Lincoln Senior Center. Online condolences accepted at www.PikeFH.com.

Dorothy was born October 4, 1923,  in Stevensville, the daughter of the late Robert and Wilhelmina (Vogt) Fiedler. On November 20, 1948, she married Richard “Dick” Mellen Kramer and he preceded her in death on September 21, 2011.  Dorothy graduated from Stevensville High School and St. Camillus School of Nursing at Borgess Hospital in Kalamazoo. She was a member of the United States Cadet Nurse Corps during WWII. Dot was a Registered Nurse and worked for the Berrien County Health Department, retiring in 1975. She was a lifelong member of St. Paul’s Ev. Lutheran Church.

Dot enjoyed sewing, painting, knitting, crocheting and quilting. When her daughters were young, she sewed clothes for them and their dolls. Dorothy was a strong believer in public education and took leadership roles in her daughters’ schools, serving as President of the Parent Teacher Association and Band Parents. For a number of years Dot and Dick ran the concession stand during Lakeshore High School football games which raised funds for the band. They were members of a square dancing club for many years and were some of the first supporters of the Box Factory for the Arts in St. Joseph.

In later years, Dot was active at the St. Joseph-Lincoln Senior Center and kept in touch with friends and family via her iPad. Dot was devoted to her grandchildren, attending their school and music events, and she loved being at the family cottage on Ford Lake in Fountain, Michigan.

Dorothy  was also preceded in death by two brothers, Robert and Theodore Fiedler.

To order memorial trees or send flowers to the family in memory of Dorothy Kramer, please visit our flower store.