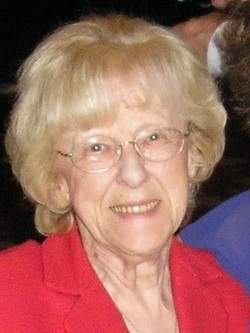 
Eloris Harriett (Kijak) Schulte, 91, of Baroda went home to be with her savior on July 21, 2016, at her home, after a brave year-long battle with failing health.

Eloris was born on July 5, 1925, on the family farm on Cleveland Avenue, and what is now Meadow Grove Place, in St. Joseph, to Joseph and Ella (Kolberg) Kijak. She attended Trinity Lutheran grade school and was a graduating member of the St. Joseph High School class of 1943.

Following graduation Eloris worked at Cooper Wells Hosiery Factory and Murphy’s Dime Store, both in St. Joseph, and at Michigan Bell Telephone Company in Benton Harbor as a ship to shore operator. On June 15, 1946, Eloris married Mylen Schulte, of Detroit, at Trinity Lutheran in St. Joseph. They later moved to the Detroit suburbs where they raised their family. When her children were in high school, Eloris began working at the JL Hudson Department Store in Harper Woods where she retired after 25 years.

Her love of flowers was evident by her beautiful gardens and numerous rose bushes. She also loved bowling, card playing and socializing with friends and family. She was an active member of her Lutheran church in East Detroit, and in 1997 moved back to St. Joseph where she resumed her membership and active participation at Trinity. Choir and music were her passions and she was actively involved also with the Ladies Aid and Lutheran Women's Missionary League programs holding several offices in each over the years. She also enjoyed her monthly luncheons with her classmates from the St. Joe High class of ’43.

She was preceded in death by her husband, Mylen in 1996, an infant daughter, Kathy in 1947, her parents and three brothers - Harris, Elden and Leslie Kijak.

She was the happiest and sweetest person there ever was, smiling constantly and always willing to help others. Her loss will be felt by many.

Rest in peace, Mama, you have earned it!

To order memorial trees or send flowers to the family in memory of Eloris Schulte, please visit our flower store.