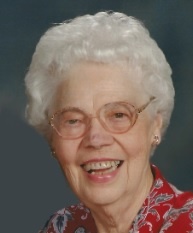 Estella Louise Van Ginhoven, 94, of Three Oaks, MI passed away peacefully on May 18, 2019 at The Willows, St. Joseph, MI with family by her side.

A celebration of life service will be held at Harbert Community Church, 6444 Harbert Road, Sawyer at 2 pm, Saturday, June 15, with visitation one hour before services. In lieu of flowers, memorial contributions may be made to the Harbert Community Church, PO Box 197, Harbert, MI 49115 or the Harbor Country Food Pantry, PO Box 113, Three Oaks, MI 49128. Online condolences accepted at www.PikeFH.com

After living in Florida, Illinois, Washington and New York, they settled in Sawyer in 1956, where Adrian managed Chikaming Gardens. Estella was a loving wife, mother, grandmother and great grandmother and her greatest joy was spending time with her family.

Estella was very active in her community and her church. She was a troop leader for both the Boy Scouts and Girl Scouts and actively supported the schools as a PTA representative and music parent. She spent 21 years helping 1 st grade students with their reading. She was especially active in her church life. She served in a variety of roles at the United Church of Christ in Sawyer, including Sunday School teacher and Youth Group leader. Through the church, she frequently volunteered her time at the Migrant Head Start Center in Sodus, MI. As a trustee for the church, she played an integral role in the construction of the fellowship hall. Later, she was an active member of the Harbert Community Church
and was nominated by the church for the 2006 United Way of Berrien County, Margaret B Upton Volunteer Leadership Award. She had been active with the Inreach, Women’s Ministry and Women’s Bible Study groups for many years and also volunteered to help with the Half Day Children’s programs.

Estella wasn’t a competitive person, but she did love playing golf at the Chikaming Country Club, where she and Adrian were members for 40 years. She was very proud of the numerous awards she won throughout the years and she especially loved playing golf with her husband on late Sunday afternoons.

Estella returned to work after raising her children and enjoyed her time as a bookkeeper for two local businesses. She was also the treasurer for various committees at her church and her homeowner’s association well into her 80’s!

Estella was predeceased by her husband, her parents, her sister Loretta and brother Lee, who was killed in action aboard the USS Greyback during WWII.

Estella and her family truly appreciated those who helped her remain active in her later years. She had many visitors and friends that kept her involved in church activities, took her for drives, doctor appointments and ice cream treats. Estella and her family also appreciated the wonderful care provided by the staff at the Titan Center and The Willows, both in St. Joseph.

To order memorial trees or send flowers to the family in memory of Estella Van Ginhoven, please visit our flower store.