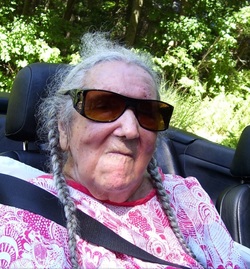 Mass of Christian Burial will be held 11 am Tuesday, December 30, 2014 at St. Agnes Catholic Church, Sawyer with Father Don Suberlak, C.R. as Celebrant. Visitation will be held Monday, December 29, from 6-8 PM at Pike Funeral Home, Boyd Chapel, 9191 Red Arrow Highway, Bridgman, MI. Burial will take place at the Bohemian National Cemetery in Chicago. In lieu of flowers, memorial contributions may be made to Southwestern Medical Clinic, 5515 Cleveland Avenue, Stevensville MI 49127.

Evelyn was born September 20, 1917 in Chicago the daughter of the late Joseph and Barbara (Jaros) Tabor. On June 1, 1937 she married Henry Riedl and he preceded her in death on February 15, 1994. A lifelong resident of Riverside, Illinois she was a member of St. Mary’s Catholic Church and while in Michigan with her son, she attended St. Agnes Catholic Church, Sawyer.

Survivors include a son, John Riedl of Sawyer; two grandsons, Henry and Mark and five great grandchildren. Evelyn was also preceded in death by a son, Henry and a brother.

To order memorial trees or send flowers to the family in memory of Evelyn Riedl, please visit our flower store.
Send a Sympathy Card