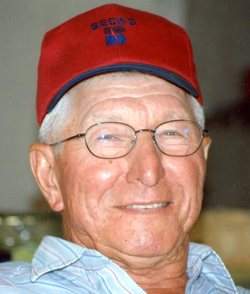 Funeral Services will be held at 2:00 PM on Friday, Dec. 11, 2015 at Trinity Evangelical Lutheran Church of Glendora, 1733 Glendora Road, Buchanan, with Reverend Jonathan Liebich officiating. Friends may meet with the family from 5-8 PM Thursday at Pike Funeral Home, Boyd Chapel, 9191 Red Arrow Highway, Bridgman. Memorials may be given to the church. Online condolences accepted at www.PikeFH.com

Fred was born March 24, 1936 in Baroda the son of the late Rhinehold and Elma “Elsie” (Strefling) Schmaltz. On November 15, 1958 he married Ann Lee Holben. Fred was a lifelong farmer and also retired from ANR Pipline after 35 years of service. He was a 1954 graduate of New Troy High School and US Army veteran. Fred was a faithful member of Trinity Evangelical Lutheran Church of Glendora.

Fred was also preceded in death by a sister Martha Embleton in 2014.

To order memorial trees or send flowers to the family in memory of Fred Schmaltz, please visit our flower store.