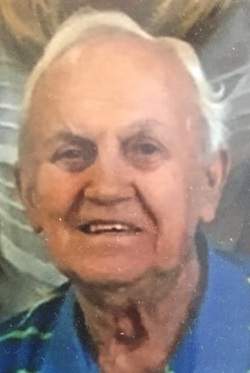 
Gene Arthur Hoffman, 86 of Stevensville passed away on Sunday, January 7, 2018 in Mishawaka.

Gene was born Wednesday, January 28, 1931 in Benton Harbor the son of the late Bert and Gladys (Anderson) Hoffman. Gene was a US Navy veteran. On February 3, 1951 he married Shirley Mae Kuntz. They owned and operated the Mini-Mart in St. Joseph in the Court House Square. He was a member of St. Paul’s Evangelical Lutheran Church in Stevensville. Gene was an avid golfer, enjoyed stained glass and traveling. He loved building and working with his hands.

Survivors include his wife of 66 years: Shirley; their daughter-in-law: Sally Hoffman; grandchildren: Stacy Yeske and her son Adin, Chad (Lindsey) Hoffman and their children, Austin, Alisyn and Ashton; siblings: Jackie Gerlach, Marilyn Whitaker, James Hoffman; and many nieces and nephews.

To order memorial trees or send flowers to the family in memory of Gene Hoffman, please visit our flower store.