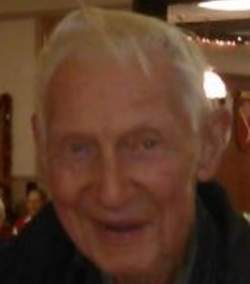 A funeral service will be held 11 AM Friday, September 1, 2017 at The Boyd Chapel of Pike Funeral and Cremation Services, 9191 Red Arrow Highway, Bridgman with Pastor Cathy Ganus officiating. Friends may meet with the family from 10 AM until the time of the service at the funeral home. Memorial contributions may be given to Baroda Church of God, 5020 Cleveland Avenue, Stevensville, MI 49127. Burial will be in Weesaw Township Cemetery, Weesaw Township, Buchanan.

George was born September 16, 1928 in Lowell, Michigan the son of the late Edward A. and Anna (Sterc) Kotesky. He was raised on a farm during the Great Depression, where he worked the fields and used horses for primary transportation. Christmas gifts were few and far between. George attended school through 8th grade and became the family’s primary driver after they owned a car. He loved polka music and taught himself to play the accordion. George was drafted into the Korean War and served 2 years in the army. He then worked at New Troy schools where he was a custodian and bus driver. On June 30, 1956, he married Garnet Johnson and had 4 children together. George had a polka band where he loved to play the accordion. His band, called the “Jolly Bohemians”, played in dance halls in the area. George loved sales and sold NA-Churs fertilizer. Later he became top salesman working for the Conklin Company where he sold agricultural and health products. George or Papa/ Gramps ( referred to by the grandchildren) loved his garden and enjoyed having a watermelon lunch together. In 1972 the Kotesky family moved to Houghton Lake, MI for over 30 years and then returned back to the Buchanan area where George continued to sell Conklin and health products. After retirement, he would always be found with his ATV working around the farm or in his half acre garden. He enjoyed spending time with his family watching the “Big Joe Polka Show” or Hee Haw on RFD TV. George had 9 grandchildren and 1 great grandchild. George and Garnet shared 61 wonderful years together. They were members of the Baroda Church of God. He will be greatly missed by his family and all. We love you Dad.

George was also preceded in death by a daughter: Shirley Marra; a sister: Daisy Strasser; and a brother: Frank Kotesky.

To order memorial trees or send flowers to the family in memory of George Kotesky, please visit our flower store.