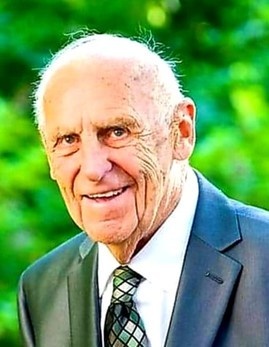 Friends may meet with the family 4 – 6 pm, Tuesday, May 25, 2021 at Pike Funeral and Cremation Services, Boyd Chapel, 9191 Red Arrow Hwy, Bridgman with a Prayer Service to follow at 6 p.m. A graveside service with military honors will be held promptly at 10 am on Wednesday, May 26 at Crystal Springs Cemetery, 1655 E Napier Avenue, Benton Harbor. In lieu of flowers, memorial contributions may be made to Jerry and Joan Planutis Memorial MSU Scholarship Fund annually awarded to a Bridgman Bee

Jerry was born in Hamtramck, Michigan on May 18, 1930, the son of late William and Anna (Marcinkus) Planutis. He was baptized at Our Lady Queen of The Apostles Catholic Church. The family, including older siblings, Bill and Dorothy, moved back to West Hazelton, Pennsylvania among their Lithuanian relatives in 1932.

Jerry loves his family, his faith and football. In 1948, as a Senior, he led the West Hazelton Wildcats into the playoffs with a 9-2 record. He was named as an All-State player. He enlisted in the Army and served in Trieste, Italy 1949-1952. He played Service Football and Basketball as well as a Postal Specialist. As a soldier, Jerry paid for his mother, Anna, to visit Italy and she saw the pope in Rome. He was recruited to the MSU Spartans as a halfback, defensive back and placekicker. His coaches were Biggie Munn and Duffy Daugherty. He was blessed to play in two Rose Bowls 1954 and 1956. The Spartans won both games. He met Joan Peapples at MSU in the cafeteria. After dating for two years, Jerry and Joan were married on August 06, 1955. She accompanied him to the 1956 Rose Bowl and Hula Bowl. Jerry was drafted by The Washington Redskins, but a head injury ended his playing career. He received his Master’s in Education from MSU and began a remarkable coaching career. He coached at Monroe, MI HS 1957-58; Indiana University 1959-1961; John Adams HS, South Bend, IN 1962-1969; Culver Academy 1970-1972; Jerry and Joan were blessed with their son, John David Planutis in 1970, the joy of their lives.

Jerry coached at Bridgman, MI HS 1972-1982. He retired from coaching and teaching in 1992 and remained active in Bridgman as an elder at Immanuel Lutheran Church, Boy Scout leader and as a Student Driver Instructor. “Coach” was inducted into the Michigan High School Football Coaches Hall of Fame in 1989. In 1996, Jerry attended a Promise Keepers rally at Soldier Field and the men were challenged to Seize The Moment for Christ. Jerry started a “Breakfast with Jesus” prayer and devotion group that still meets in Bridgman every Thursday morning. His beloved wife, Joan, went to Jesus on November 13, 2006. Jerry kept fit in retirement by swimming regularly. After a blind date and a year of courtship, Jerry married June Bendewald on November 29, 2008. They enjoyed traveling all over the country. They played Bridge and Dominoes. They loved to dance. June went to Jesus on March 05, 2021.

To order memorial trees or send flowers to the family in memory of Gerald "Jerry" Planutis, please visit our flower store.