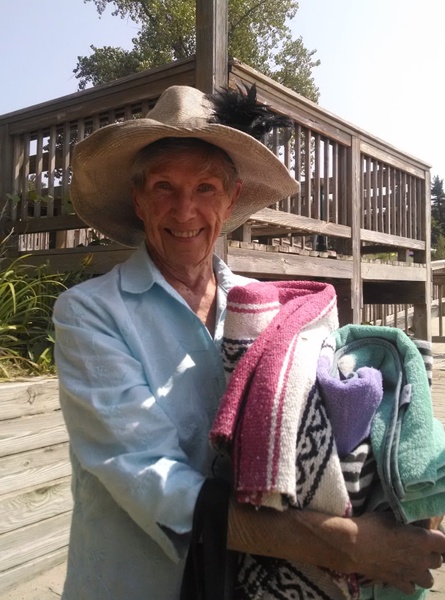 A celebration of life for Trudy and her partner Carl “Chad” Tufts will be held 11 AM Saturday, September 17, 2022 at Lord of Life Lutheran Church, 9420 Portage Road, Portage, Michigan.  A luncheon will follow the service at the church. Gertrude will be buried with her husband Greg in the Fort Custer National Cemetery in Augusta, Michigan. Online condolences accepted at www.PikeFH.com

Gertude “Trudy” was born Gertrude Raasch on September 22, 1933 in Lake Mills, Wisconsin.  She was the youngest of six children.  Her parents were the Reverend and Mrs. J. Martin Raasch.  Known as “Trudy”, she attended a one room Evangelical Lutheran school house in which she completed grades K through 8, as back then, that’s how it was done.  She graduated from Lake Mills High School in 1951 and continued her education at the University of Wisconsin, graduating as a certified nurse and then passed her state boards, becoming a Registered Nurse.  In the early 50’s, this was a huge accomplishment.  She worked at the University of Wisconsin Hospital in Madison.  Also in Madison she met Gregory J. Blied.  They met at a wedding where Greg was the best man and Trudy was a guest.  When Trudy first saw Greg, she thought to herself, he is so good looking that he’s either married or Catholic!  They were married in 1956 and moved to Milwaukee.  Sons Gary and Mike were born in 1958 and 1960 and in 1961 the couple and their two toddlers moved to Battle Creek. In 1963 they welcomed a daughter, Elizabeth Ann (“Betsy”) into the family.  They lived in Battle Creek and Trudy worked for Liela Hospital and was a member of the Battle Creek Junior League.  In 1979 she moved to Borgess Medical Center in Kalamazoo where she took the role of Enterostomal Therapist and proceeded to revolutionize the care protocols in this field.  She later expanded to include wound management and skin care.  She all but eliminated pressure wounds or bed sores and pioneered new treatment regiments saving the hospital millions.  In 1992 she was awarded ET Nurse of the year for the five state Midwest region.  Her contributions at Borgess were so significant that in 2006, ten years after her retirement, she was awarded the first “Legends of  Borgess” award.

In 1997, she lost Greg, her husband of 40 years when a motorcycle struck him while he was riding his bicycle on the Kal Haven Trail.  She later partnered with Carl “Chad” Tufts of Shawnee, Oklahoma.  Over the next 20 years Chad and Trudy traveled the world in adventure after adventure.  Chad passed in 2021, Trudy being his only family by then.

To order memorial trees or send flowers to the family in memory of Gertrude "Trudy" Raasch Blied, please visit our flower store.