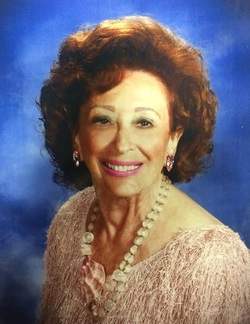 The Memorial service is being postponed until the Spring so that more of her friends and relatives will be able to attend. The date and time of the service will be announced this spring.

Gertie was born November 4, 1932 the daughter of the late Norman and Madeline (Miller) Stelter. In 1958 she married William Robert Johnson. Gertie was a true Grande Dame, and the heart and soul for over 47 years of Bill’s Tap, which she co-owned with her husband Bill. Her flair for fashion and style made her the natural choice to run the Blossomtime Fashion show for decades, along with holding positions at the Blossomtime Festival from Secretary to President. Gertie was also very strong in her Christian faith, and was a lifelong member of St. Paul’s Lutheran Church in Stevensville, Mi. Gertie loved animals, and rescued numerous dogs. She loved people just as much, and because of her effervescent personality, it’s pretty much impossible to find anyone who didn’t love her.

Survivors include a sister, Norma McCormic-Mayo of Battle Creek and Nephew Michael and Scott McCormic.

To order memorial trees or send flowers to the family in memory of Gertrude Johnson, please visit our flower store.