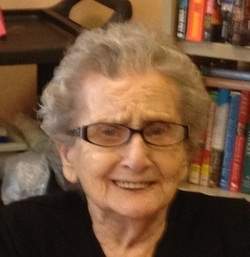 Funeral Services will be held 11 AM Monday, January 15, 2018 at the Boyd Chapel of Pike Funeral and Cremation Services, 9191 Red Arrow Hwy, Bridgman. Burial will be in Ruggles Cemetery, Baroda. Friends may meet with the family from 10 - 11AM prior to the service at the funeral home. Memorial contributions can be made to Alzheimer’s Association, 564 S. Main Street, Suite 200, Ann Arbor, MI 48104-2870.

Hazel was born December 20, 1915, in Chicago, the daughter of the Tunis and Jenny (Korte) Van Den Handel. On October 9, 1936, she married John Baab and they shared their lives for 42 years until his death in 1979. They moved to Berrien Springs in 1942, where they farmed and raised their family. She spent most of her later years in St. Joseph. Children, travel and the Berrien County Youth Fair were chief among her great loves.

Hazel was also preceded in death by five sisters and four brothers.

To order memorial trees or send flowers to the family in memory of Hazel Baab, please visit our flower store.