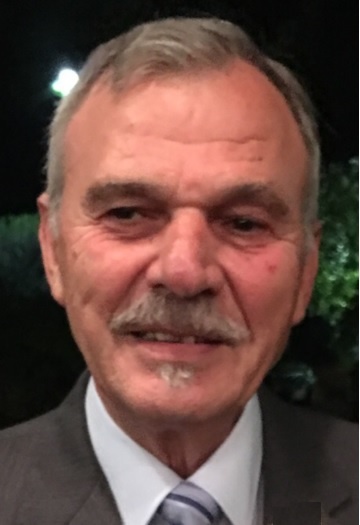 Hristos  “Chris” George Lepeniotis, 74, of Bridgman passed away Thursday, December 12, 2019 at his home.

A Funeral Service will be held at 11 AM, Monday, December 16, 2019 at Annunciation & Agia Paraskevi Greek Orthodox Church, 18000 Behner Road, New Buffalo, with Father Paul Martin officiating.  Burial will be at Pine Grove  Cemetery in New Buffalo. Friends may meet with the family Sunday, December 15, 2019 from 4-8 PM at the Boyd Chapel of Pike Funeral and Cremation Services, 9191 Red Arrow Highway, Bridgman.  Memorial contributions may be given to the Annunciation & Agia Paraskevi Greek Orthodox Church. Send flowers to the family and online condolences accepted at www.PikeFH.com

Chris was born on a Thursday, August 23, 1945 in Trikala, Greece the son of the late George and Vasiliki (Hasiotis) Lepeniotis. On December 26, 1969 he married Anastasia Karaoulas and they shared 49 years together. Chris served in the Greek Army from 1964 through 1966. After his service he became a butchers apprentice and ultimately a certified meat inspector.  He and Ann emigrated to the United States in 1969 and landed in Clarksburg, West Virginia, where he had been recruited to join the Swift Food Company as a USDA certified inspector. There they welcomed their first son George. A few years later they moved to Southwest Michigan where Chris became a manager at Babe’s Lounge in Benton Harbor. In 1976 they started their own restaurant and named it Olympus, after the mythical Greek mountain. Their second son Basil was born during the blizzard of ‘78. Chris and Ann spent the next 42 years raising their family and making Bridgman their home. Chris was truly a family man and enjoyed spending time and cooking for his family and friends. “Papou“ (Grandpa in Greek) had 5 grandchildren including his namesake, Christos Basil Lepeniotis.

Chris was also preceded in death by a brother: Dimitrios Lepeniotis.

To order memorial trees or send flowers to the family in memory of Hristos "Chris" Lepeniotis, please visit our flower store.