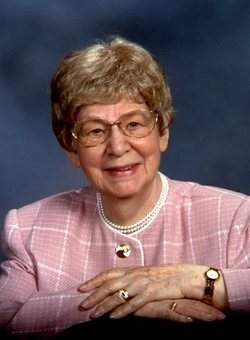 A funeral service will be held 10 AM Friday, November 14, 2014 at Pike Funeral Home, Boyd Chapel, 9191 Red Arrow Hwy., Bridgman. Burial will follow in Graceland Cemetery, Bridgman. Friends may meet with the family from 6-8 PM Thursday at the funeral home. Memorial contributions may be given to Hospice at Home, 4025 Health Park Lane, St. Joseph, MI 49085 or The Macular Degeneration Foundation PO Box 531313, Henerson NV 89053.

Ilse was born January 19, 1920 in Wilhelmshaven, Germany the daughter of the late Ewald and Elfrieda (Lenz) Toennies. Ilse came to America in 1950 on the Queen Mary from France to New York. She was a world traveler and never lost her wanderlust to travel. On June 16, 1949 she married Walter G. Werk and he preceded her in death on August 8, 1979.

Ilse was also preceded in death by a daughter, Hanna Wetzel and grandson Thomas Wetzel.

To order memorial trees or send flowers to the family in memory of Ilse Werk, please visit our flower store.