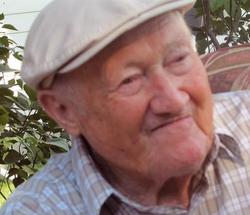 Jacob Daniel Busick, Sr., 90, known as “The Farmer” to many folks, of Buchanan, Michigan died Thursday, October 10, 2013 at home surrounded by his family. Jake was born April 5, 1923 in Glendora, Michigan to Andrew and Christina (Hirschstein) Busick. He attended Trinity Evangelical Lutheran Church, Glendora where he was confirmed April 10, 1938 and a lifetime member along with his family.

Jake married Shirley Larson, Chicago, Illinois, March 29, 1947 and together had 6 children. He was a devoted husband and loving father.

Jake was a dairy farmer where he taught his children the value of life and hard work. He loved all his International tractors which are used on his farm today. Farming was his trait at heart, however he worked for Industrial Rubber Company in New Troy, Michigan and Clark Equipment in Buchanan, Michigan. Upon retirement from the factories he then continued farming with his son Jake, who is farming along with his son Jake III today. A dream fulfilled to have his farm (The Troy Meadow Farm) keep running as a family farm with the help of all his grandsons.

Along with 4-H and the Berrien County Youth Fair, which was a big part of his life when the children were young, he was proud with all the sheep and steers that took Grand Champion and Reserve Grand Champion. A Proud Papa!

Jake and Shirley couldn’t wait until blueberry season came where they helped pack blueberries at Ed and Jeri Klug Blueberry Farm. They were the oldest folks there and the young ones looked up to them. Not only mentors in their own family but to many others, always great teachers in every way.

He also loved being involved with the Buchanan Co-op and other farm groups. Always enjoyed the picnics with all the farmers.

Jake loved his family time and holidays with all his children and their families. Always a big get together at the “Farm” - a special time for him and wife Shirley...along with polka music which he taught all his daughters to polka and a card game or two of eucher.

He loved to watch wrestling on TV along with the Polka’s and Gaither Gospel Music. Most of all he loved mowing his lawn and being outside. He loved feeding his birds and hearing the sound of all his wind chimes.

To order memorial trees or send flowers to the family in memory of Jacob Busick, please visit our flower store.
Send a Sympathy Card