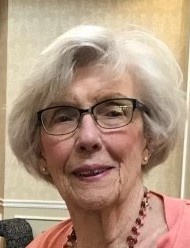 A private burial commitment will be held on March 11, 2022, at the Riverside Cemetery in Three Oaks, MI. A memorial service will be held later this spring in Sawyer, MI. Memorial contributions may be made to the Harbert Community Church or the Bethany Beach Tabernacle. Online condolences accepted at www.PikeFH.com.

Jacque was a beloved mother, grandmother, and great grandmother to the forty-two members of her family. She was a source of encouragement, love and prayers and will be dearly missed by her family. Jacque was a “third grandmother” to many of her grandchildren’s friends and was called Grandma Jacque by dozens. Her home was always open to family and friends. Jacque had a lifelong faith in God and a lifelong service to her church and community.

Jacque was born on May 14, 1929, in Chicago, IL. She was the only child of Arthur and Edna (Wahlin) Hedberg. The family lived in the Edgewater neighborhood and attended the Addison Street Baptist Church. Jacque attended Pierce Elementary School and Senn High School and graduated from North Park College in 1949. Summers were spent in Bethany Beach in Sawyer, MI.

Jacque met Donald Ytterberg at Bethany Beach and they were married on April 8, 1950, in Chicago. Jacque’s grandfather Reverend Victor Hedberg officiated at the ceremony. Jacque was preceded in death by Donald in 2005 after 54 years of marriage.

Jacque and Don’s first home was in the Mt. Greenwood neighborhood of Chicago and they later moved to Oak Lawn, IL where they raised their three boys. The family were active members of the Salem Baptist Church in Beverly and Orland Park, IL.

Jacque spent every summer in Bethany Beach where the both the Wahlin and Ytterberg families have had summer homes for six generations. Don and Jacque were active members of the community and served in many capacities.

To order memorial trees or send flowers to the family in memory of Jacquelyn Ytterberg, please visit our flower store.