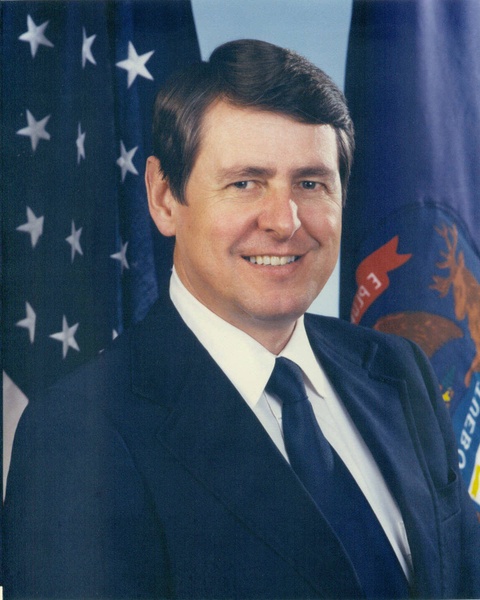 Born October 9, 1938, in Menominee, Michigan James was the sixth of ten children born to Harry and Emerald (Jossart) Gunderson. He married Deanna (Lund) February 9, 1958, in Marinette, Wisconsin. Jim loved growing up in Menominee and spent his youth swimming, fishing and playing games with his siblings and their friends on Kirby Street. Every summer he looked forward to spending time at his grandparent’s homestead in Minocqua, Wisconsin.

Jim, a 1956 graduate of Menominee High School was proud to be a Maroon! Throughout high school he played football, ran track, performed in plays, the student council and was his senior class president.

After graduation Jim enlisted in the United States Air Force and was stationed in Texas, Colorado and Panama City, Florida. He was discharged in 1960 and he applied to the Michigan State Police and was accepted. He graduated in April 1961 as a member of the 49th Trooper Recruit School. He served at the Alpena and Bay City posts and was promoted to Detective Sargent and assigned to the New Buffalo post until he retired in 1984. He then served as a Lieutenant with the Chikaming Township Police and took over as Chief of Police when Ivan Zimmermann retired.

Retiring at age 50 gave Jim more time to pursue his passions in life; hunting, fishing, reading, building puzzles, and watching his beloved Green Bay Packers and the University of Michigan football teams. It also afforded him the time to hone his plumbing, electrical and carpentry skills when tackling all the home improvement projects his family presented him with.

Jim was a 50-year member of Trinity Lutheran Church is Sawyer and the Three Oaks American Legion Post 204. Previously he was a licensed charter boat Captain with the New Buffalo Charter Service; and a past member of the New Buffalo Rod-n-Gun Club.

Jim will be greatly missed by all who knew him. He is survived by his wife Deanna, and daughters Laurie Koehler and Debra Gunderson, both of Three Oaks; grandson Jordan (Sandra) Koehler of Kalamazoo; granddaughter Rachel (Chad) Mars of Three Oaks; brothers Robert (Barb) Gunderson of Menominee and Jon (Mary Ann) Gunderson of Alpena; sisters Ruth (Robert) Jome of Manitowoc, Wisconsin and Ellen Swanson of Marinette, Wisconsin; brother-in-law Forrest (Rocky) Coleman of Clermont, Florida; sister-in-law Roberta Anderson of Harrisville, Pennsylvania; and many nieces and nephews.

Family and friends will gather at 11:00 AM on Tuesday June 7, 2022, at Riverside Cemetery on Three Oaks Road, Three Oaks where James will be laid to rest with military honors. Following the service, a luncheon will be served at the Three Oaks American Legion Post 204 on Linden St. in Three Oaks.

To order memorial trees or send flowers to the family in memory of James W. Gunderson, please visit our flower store.