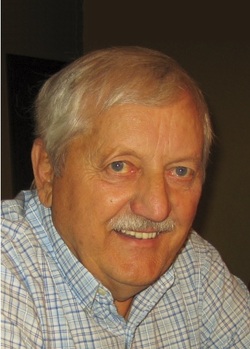 
James Roland Nitz, 77 of Baroda passed away on Saturday, November 12, 2016 at the University of Michigan Hospital in Ann Arbor.

A graveside service with military rites will be held 11 AM Thursday, November 17, 2016 at Ruggles Cemetery, 8530 Stevensville-Baroda Road, Baroda with Reverend Christopher Noffke officiating. A luncheon at the Baroda American Legion will follow the graveside service. Memorial contributions may be made to the Music or Sunday School Fund at Zion United Church of Christ, PO Box 10, Baroda, MI 49101.

James was born January 9, 1939 in Baroda the son of the late Elmer Frederick and Alexandria (Reisig) Nitz. James served his country in the US Air Force and was a member of its chapel choir. He was a farmer who specialized in grapes and grain. James was a member of the Zion United Church of Christ in Baroda where he taught Sunday School for 31 years, and was its Sunday School Superintendent for the last ten years. James enjoyed singing in the church choir for 51 years.

James was also preceded in death by a granddaughter, and three brothers: Douglas, Edgar, and Virgil.

To order memorial trees or send flowers to the family in memory of James Nitz, please visit our flower store.
Send a Sympathy Card