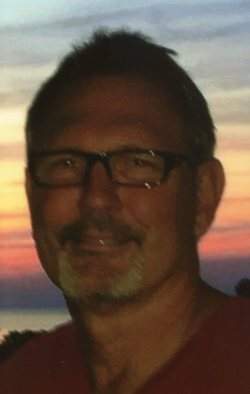 A funeral service will be held 6:30 PM Wednesday, September 21, 2016 at Pike Funeral and Cremation Services, Boyd Chapel, 9191 Red Arrow Highway, Bridgman, with Pastor Maynard Schoen officiating. Friends may meet with the family from 5 - 6:30 PM prior to the service at the funeral home. Online condolences accepted and a live stream of the service at www.PikeFH.com.

Jim was born September 25, 1959 in Michigan City, Indiana the son of Harold and Carol (Sips) Wold. On August 21, 1993 Jim married the former Janis Dowell. He was a State Farm Insurance agent in Mishawaka. Jim always put family first and enjoyed spending time with them. He also enjoyed boating and in his younger years worked at Oselka Marina in New Buffalo.

Survivors include his wife of 23 years, Janis; a daughter, Jillian (Fiancé, Michael Starbuck) Wold of Wyoming, Michigan; a son, Jacob Wold of Berrien Spings; his mother, Carol Wold of New Buffalo; a brother, John Wold a sister, Kathleen Wold both of New Buffalo; and father- and mother-in-law, John and Marian “Buddy” Grooten of Berrien Springs.

Jim was preceded in death by his father, Harold A. Wold in 2011.

To order memorial trees or send flowers to the family in memory of James Wold, please visit our flower store.