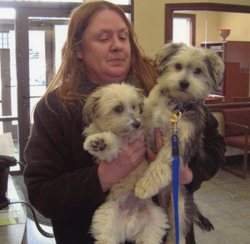 A funeral service will be held at 11 AM on Friday, February 17, 2017 at The Boyd Chapel of Pike Funeral and Cremation Services, 9191 Red Arrow Hwy, Bridgman. Friends may meet with the family on Thursday from 5-7 PM at the funeral home. Burial will be in Graceland Cemetery, Bridgman. Memorial contributions may be given to Berrien County Cancer Service, 7301 Red Arrow Hwy, Stevensville MI 49127 or The Humane Society of Southwest Michigan, 641 S. Crystal Ave., Benton Harbor MI 49022.

Janet was born August 6, 1961 in Michigan City, Indiana, the daughter the late Lavern and Genevieve (Jones) Clemons. She was a 1980 graduate of New Buffalo High School and on August 10, 1990 she married Daniel M. White. Janet enjoys playing cards and her Tuesday Bingo with friends.

Survivors include her husband of 26 years, Daniel; a brother, Michael Clemons of New Buffalo; a sister, Cindy (Michael) Wiedenman of Arizona; three nephews – Logan, John, and Bob Clemons; and her fur babies – Boo and Sparky.

Janet was also preceded in death by a brother, Ronald Clemons; and a sister, Darla Freundt.

To order memorial trees or send flowers to the family in memory of Janet White, please visit our flower store.