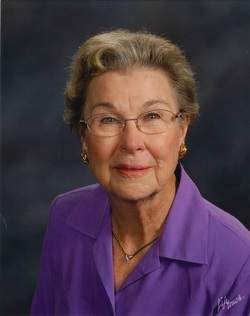 Janet was born on January 18, 1927 in Chicago, the eldest daughter of Arnold and Pearl (Peterson) Gustafson. On September 11, 1948, she married the love of her life, Ralph Ytterberg. Janet and Ralph traveled the world, and lived in 15 different places, but they always enjoyed summers with friends and family in Michigan. Ralph died in 2004, and for the last 13 years she missed him greatly. Janet was a proud and devoted wife and mother, and she provided a rich legacy of family and faith. Janet was a member of Harbert Community Church and First Presbyterian Church of St. Petersburg, Florida.

Funeral services will be held 2 PM Saturday, December 9, 2017 at Harbert Community Church, 6444 Harbert Road, Sawyer, with Reverend Jay Fast officiating. Burial will be in Riverside Cemetery, Three Oaks. Friends may meet with the family on Saturday at the church from 12 noon until the time of the service. As an expression of sympathy, memorial contributions may be given to Harbert Community Church or Chikaming Open Lands.

To order memorial trees or send flowers to the family in memory of Janet Ytterberg, please visit our flower store.