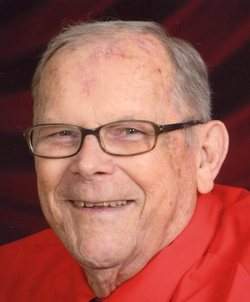 A private family burial will be at Graceland Cemetery, Bridgman and a memorial service will be held 11 AM Thursday, August 13, 2015 at the Stevensville United Methodist Church, 5506 Ridge Road, Stevensville, with Reverend David Hills officiating. Friends may meet with the family from 10 - 11 AM prior to the service at the church. Memorial contributions may be given to Hospice at Home, 4025 Health Park Lane, St. Joseph, MI 49085 or Stevensville United Methodist Church.

John was born March 28, 1928 in Sawyer, the son of the late John and Helen A. (Kading) Svorec. On October 20, 1956 he married his sweetheart, Carol Joan Phelps. John was a veteran of the Korean War receiving a Bronze Star for his service. He was a letter carrier for the US Postal Service and owned and operated Had’s Drive-In in Bridgman. He was a life member of American Legion Bridgman Post 331 and a life member of the Disabled American Veterans, Post 17. John was also a member of the Stevensville United Methodist Church.

John was also preceded in death by a brother Raymond Svorec.

To order memorial trees or send flowers to the family in memory of John Svorec, please visit our flower store.