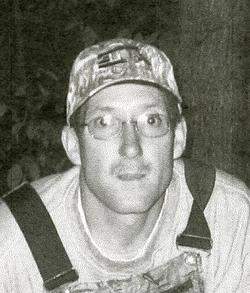 A memorial service is being planned for this spring. Memorials may be made to Edgewater Bank, 4509 Lake Street, Bridgman, MI 49106 in Jon’s name for the placement of a bench at Weko Beach.

Jon was born September 8, 1964, to Grover Robert and Sally Ann (Brindley) Holobaugh in Kenton, Ohio. Jon was a graduate of Bridgman High School, Class of 1982 and had worked for the Bridgman City Water Department. Jon loved to be outside, so he could hunt and fish, coach baseball, and work in the garden. Jon also enjoyed woodworking and home repair.

Survivors include his sons - David and Daniel Holobaugh both of Wyoming, MI; his mother - Sally Holobaugh of Bridgman; and sisters - Betsy (Duncan) Briggs of Eau Claire, Susan (Dirk) Vander Does of St. Joseph, Cathy (Jack) Kuss of Bridgman; several nieces, nephews, great nieces and great nephews. He will be missed by many close friends.

Jon was preceded in death by his father, Grover R. Holobaugh in 2011.

A memorial service will be held at a later date.

To order memorial trees or send flowers to the family in memory of Jon Holobaugh, please visit our flower store.