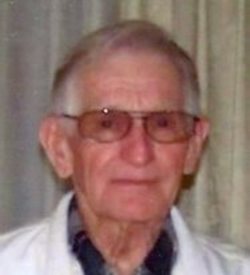 Funeral services will be held at 11:00 AM, Friday, February 21, 2014 at Pike Funeral Home, Boyd Chapel, 9191 Red Arrow Highway, Bridgman, with Jeff Hendrix, grandson, giving a devotion for family and friends. Burial will be in Lincoln Township Cemetery, Stevensville. Friends may meet with the family from 5 - 7 PM on Thursday at the funeral home. Memorial contributions may be given to Hospice At Home, Grace Lutheran Church, St. Joseph, or donors choice.

Joe graduated from Bridgman High School in 1944 and joined the Navy the same year, taking part in the invasion of Okinawa, Japan. He retired from Allied Signal (Bendix Corporation) after 32 years and continued farming with his son, Jim. He was a member of the Stevensville American Legion and also a member of the St. Joseph Kickers Club where he enjoyed dancing, listening to music and being around people.

He is also preceded in death by his parents, his siblings Frank Mikel, Catherine Gajniak, Julie Bala, Sophia Grothe and nephew Wayne Mikel.

To order memorial trees or send flowers to the family in memory of Joseph Mikel, please visit our flower store.
Send a Sympathy Card