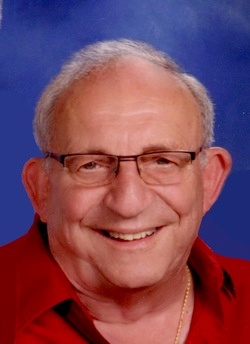 A Memorial service to celebrate the life of Lee will be held at 12:30 PM Saturday, December 5, 2015 at St. Joseph First United Methodist Church - 2950 Lakeview Ave., St. Joseph, MI 49085. During his journey with lung and brain cancer he participated in a test study and his final wishes were honored on Wednesday with the acceptance to donate his body to Life Legacy for a research study program. A private family committal service will be held with family at a later date. Online condolences accepted at www.PikeFH.com.

Lee was born on November 24, 1933 in Flint, to Melvin and Geneva Benson and he was an older Brother to Ann Benson. On May 1, 1954 he married Marcia Tendick sharing 61 years together. Lee served in the US Army at Fort Monmouth during the Korean Conflict. He graduated from Tri-State University in Angola, with a degree in Accounting and Business Management. While living in St. Joseph, he was the proud owner of Baskin-Robbins and co-owner of Benson's Painting with his son Mark Benson. He also taught accounting and business courses at Lake Michigan College and was a substitute teacher for the local community schools. Lee enjoyed an opportunity to serve on a mission trip with his wife for two months in Valoure, India for a finance study at Valoure Medical Hospital. He volunteered as an auxiliary police as a tracking officer with his English blood hound. He enjoyed serving his church. He loved spending time with his family and friends, traveling and sharing a good joke. He was a family man enjoying life with his children.

Lee is survived by his wife, Marcia; sons: David and Mark from Fairplain; his daughter: Milisa (Benson) Johnson and son-in-law Dean Johnson from Fort Wayne; his grandchild: Ashley (Benson) Keefer and husband Eric Keefer; along with two great-grandchildren: Audrey and Aly Keefer from Portales, NM and a step grandchild: Shannon Goad.

To order memorial trees or send flowers to the family in memory of Lee II, please visit our flower store.